Nathan Gorham is a Toronto criminal lawyer, whose practice focuses on complex criminal trials and appeals. He has a particular interest in defending the wrongfully accused, especially in cases involving dishonest or corrupt prosecution witnesses.

With head offices in Toronto, Ontario, Mr. Gorham regularly acts on trials and appeals throughout southern Ontario. His firm also has offices in Atlantic Canada, and Mr. Gorham has acted in criminal trials an appeals in New Brunswick, Nova Scotia, Prince Edward Island, and Newfoundland.

Mr. Gorham holds a Master of Laws from the University of Toronto, where he continues his studies as a doctoral candidate. His research focuses on miscarriages of justice arising in the bail system.

Mr. Gorham is also an adjunct professor at the University of New Brunswick, Faculty of Law.  He has taught courses on homicide (murder and manslaughter), criminal law, wrongful convictions, and legal ethics.

As a writer, Mr. Gorham authored a text book on drug offences. His writing has also been published in academic journals, professional periodicals, and national newspapers.

Due to his expertise and legal knowledge, Mr. Gorham is often consulted to provide expert legal commentary for national news media. 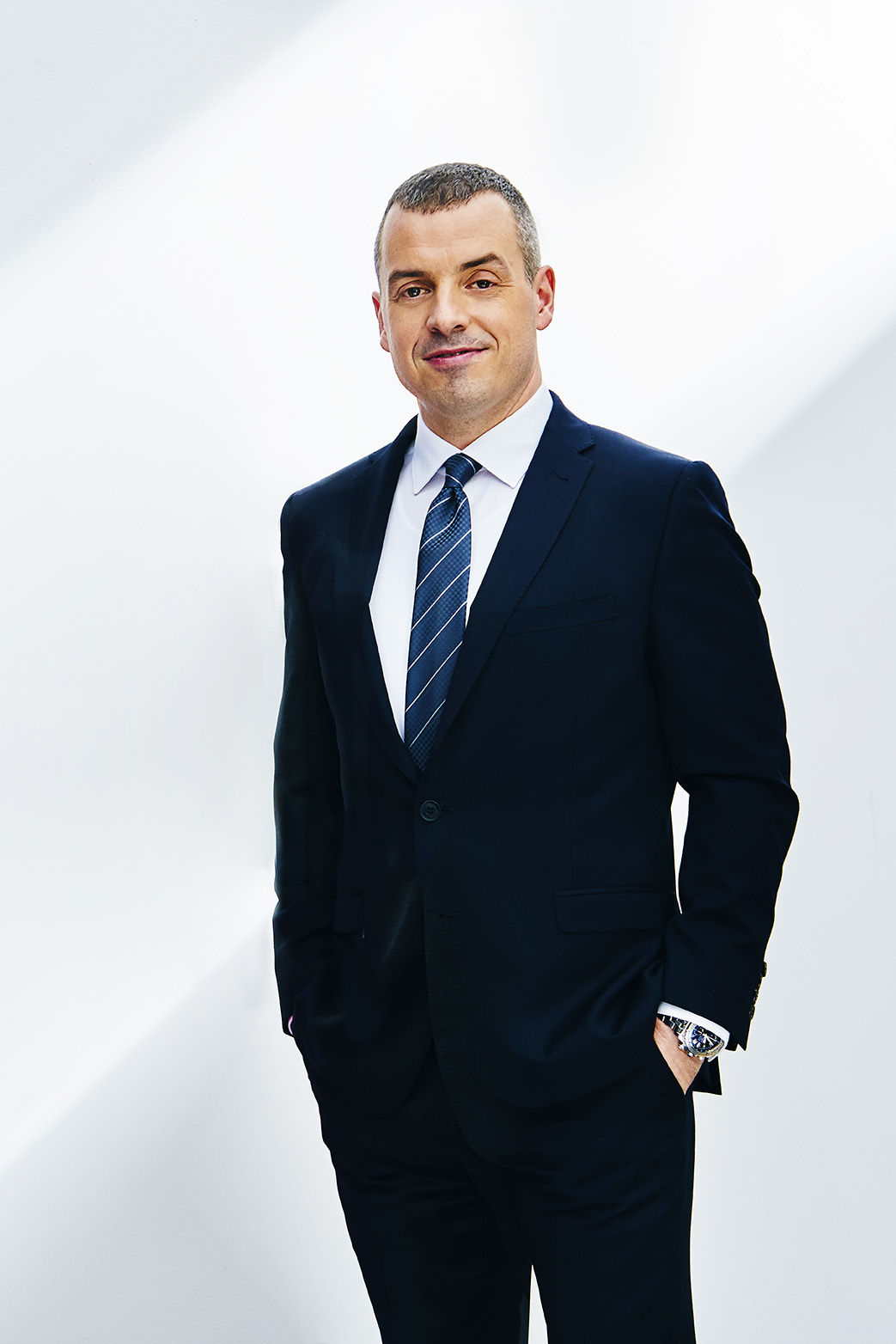 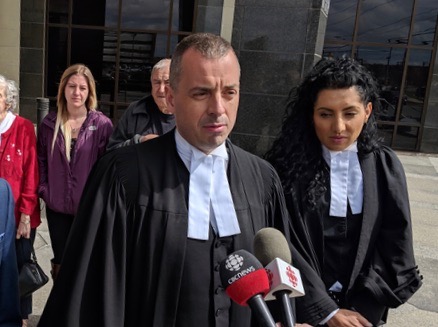 Toronto and Saint John Criminal Lawyer, Nathan Gorham, speaking with the news media on behalf of a client was acquitted of a homicide offence.

The best Toronto criminal lawyers possess the experience and skill to win the most serious and difficult cases. While a lawyer’s past success does not guarantee future results, since each case depends on its facts, a lawyer’s past success reflects his or her experience and perhaps skill. Toronto criminal lawyer, Nathan Gorham, regularly succeeds in defending complex criminal trials and appeals. Below, you can read about some of his recent successes.

In March 2021, Mr. Gorham represented a client who was charged with the killing of a two year-old-child. While this individual was baby-sitting the toddler, she stopped breathing and was rushed to the hospital. At the first trial, while represented by another lawyer (not Mr. Gorham), this individual was  convicted of murder, after a series of “expert” witnesses, paediatricians and pathologists, testified that the child could not have died from a fall in the bathtub, as the defendant explained. When he successfully appealed, and received a new trial, Mr. Gorham agreed to represent this individual. Under intense cross-examination at the second trial, one doctor admitted that he should not be testifying as an expert and two others admitted that they were wrong in their opinion. As a result of this evidence that emerged during Mr. Gorham’s cross-examination, the prosecution stayed the charges, acknowledging that they had no prospect of conviction. 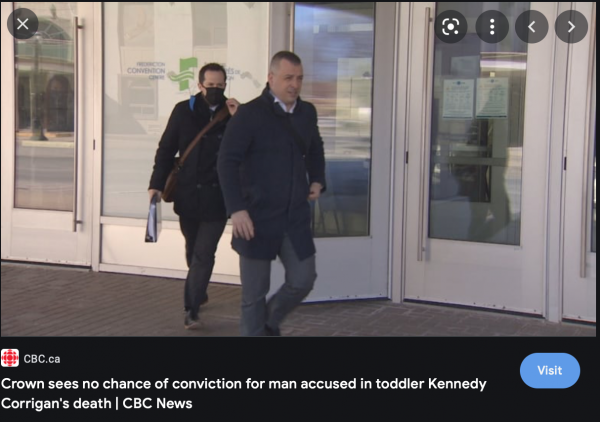 Mr. Gorham represented this client on an appeal against a sexual assault conviction. The defendant was convicted of sexual assault based on an allegation that he did not obtain the complainant’s consent to sexual activity. During the date, the parties cuddled, massaged each other, watched a movie, and went to bed together, partially clothed. The trial judge found that the defendant believed the complainant was consenting, but that he did not take reasonable steps to ascertain her consent. On appeal, Mr. Gorham argued that the trial judge erred by conflating the issues of “consent” and “mistaken belief in consent”. The Court of Appeal allowed the appeal and ordered a new trial on the charge of sexual assault.

This client was convicted of sexual assault and sentenced to nine years in prison. He maintained his factual innocence and retained our firm to represent him on appeal against conviction. Ms. Vandebeek acted for him on the bail pending appeal. He was released on bail by the Ontario Court of Appeal.

Mr. Gorham and Ms. Vandebeek represented a client charged with multiple counts of first degree murder. This client suffered from mental disorder. This illness caused delusions. Based on psychiatric evidence from multiple doctors, the jury found this defendant unfit to stand trial.

Mr. Gorham and Ms. Vandebeek applied for bail for a client who is charged with first degree murder. The prosecution alleged that invaded the victim’s home and then stabbed her in the heart. Based on a strong plan of proposed supervision, the bail justice granted the defendant bail on the charge of first degree murder.

Mr. Gorham represented a woman who pleaded guilty to dangerous driving. He argued that the guilty pleas, entered with another lawyer, were not informed or voluntary. The Ontario Court of Appeal agreed and ordered a new trial.

Not guilty of dangerous driving causing death (May 2019)

Mr. Gorham and Ms. Vandebeek represented a man who was charged with homicide in an allegation of dangerous driving causing death. The prosecution alleged that the defendant intentionally drove dangerously causing the victim to lose control of her car and crash into the ditch. This was a tragic accident. But the defendant testified that he was not chasing the victim nor driving in a dangerous manner. The jury found him “not guilty” of dangerous driving causing death.

Not guilty of cocaine trafficking (April 2019)

Mr. Gorham represented a client charged with possession for the purpose of trafficking cocaine.  In this case, the police executed a search warrant on his client’s car and discovered two ounces of crack cocaine as well a heroin in spray can with a false bottom. Mr. Gorham presented at trial that another person was driving the car regularly. The trial judge found it to be a plausible theory that the other person left the cocaine concealed in the car.  For that reason he found the defendant not guilty of possessing cocaine for the purpose of trafficking.

In February 2018, Mr. Gorham and Ms. Vandebeek defended a client before the Ontario Superior Court of Justice who was charged with second degree murder. This client maintained his innocence and explained that he was acting in self-defence. At the beginning of March 2018, the jury returned a verdict of “not guilty” of second degree murder.

Mr. Gorham represented a client who had been convicted of sexually assault and sentence to a year in custody.  On appeal, he argued that the trial judge misapprehended the evidence and applied an uneven level of scrutiny to the accused’s evidence at trial compared with the complainant’s evidence. In January 2019, the Summary Conviction Appeal Judge, in Brampton, Ontario, overturned the conviction for sexual assault and ordered a new trial.  * In April 2019, the prosecution stayed the charges against the accused.

Not guilty of sexual assault (December 2018)

Mr. Gorham represented a client charged with sexual assault in the Ontario Court of Justice.  The prosecution alleged that the accused sexually assaulted the complainant on three different occasions, groping her on the first two and forcing sexual intercourse on the final occasion. The accused testified that he never touched the complainant inappropriately and, in fact, she initiated unwanted sexual activity with him.  In December 2018, Mr. Gorham’s client was found not guilty of sexual assault by a Toronto area judge.

Ms. Vandebeek represented a client who had been convicted of fentanyl trafficking related offences upon which the trial judge imposed a five year sentence of imprisonment.  On appeal, Ms. Vandebeek argued for a new trial on the fentanyl convictions because the trial judge erred in convicting the accused.  In December 2018, the Ontario Court of Appeal allowed the appeal and ordered a new trial.

Mr. Gorham represented a client who had been convicted of trafficking cocaine, methamphetamine, and hashish and had been sentenced to six years imprisonment.  On appeal, he argued that the trial judge erred by permitting the prosecution to introduce unreliable evidence relating to the police investigation. In November 2018, the Court of Appeal allowed the appeal and ordered a new trial on the charges of trafficking cocaine, methamphetamine, and hashish.

Not Guilty of a Home Invasion Robbery (October 2018)

Mr. Gorham represented a client charged with a home invasion robbery where the victim was beaten in the face with a bat.  The defence cross-examined the prosecution’s main witness to expose his motive to fabricate the defendant’s involvement as well as significant flaws in the witness’s evidence. The defendant testified that he was not involved in the robbery.  In October 2018, the trial judge found Mr. Gorham’s client not guilty of robbery and wearing a mask while committing the indictable offence of robbery.

Mr. Gorham and Ms. Vandebeek represented a client who had been convicted of second degree murder for his involvement in a shooting during a botched drug robbery.  On appeal, they argued that the trial judge improperly admitted expert evidence and provided the jury with flawed instructions relating to the identity of the murderer.  In September 2018, the Ontario Court of Appeal granted the appeal and ordered a new trial for murder. * Two months later, the accused was found not guilty of murder but guilty of manslaughter.  *He received a time-served sentence and walked out of the custody box.

Mr. Gorham regularly defends high-profile, complex murder trials and appeals. In a recent notable case where he successfully sought the exclusion of a forensic pathologist evidence, the National Post reported that his cross-examination was “devastating”. 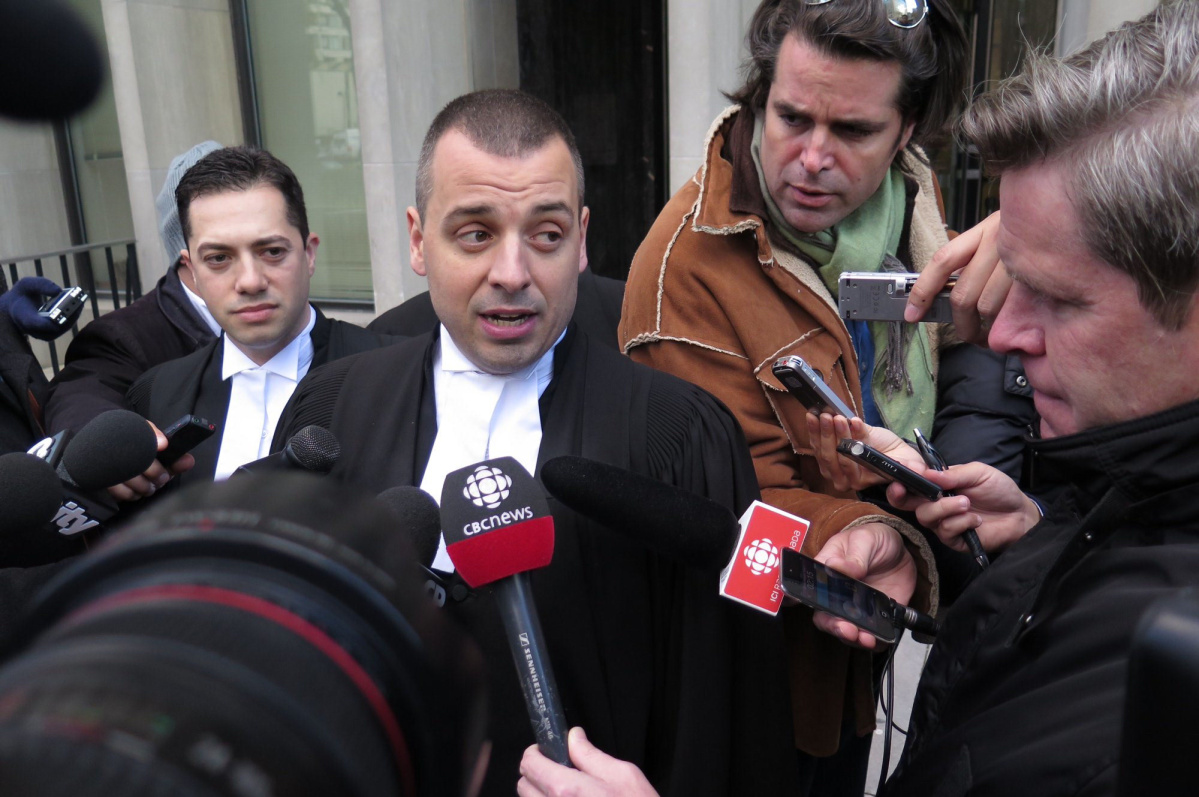 Toronto Criminal Lawyer, Nathan Gorham, speaks with the news media outside of the courthouse in Toronto, Ontario 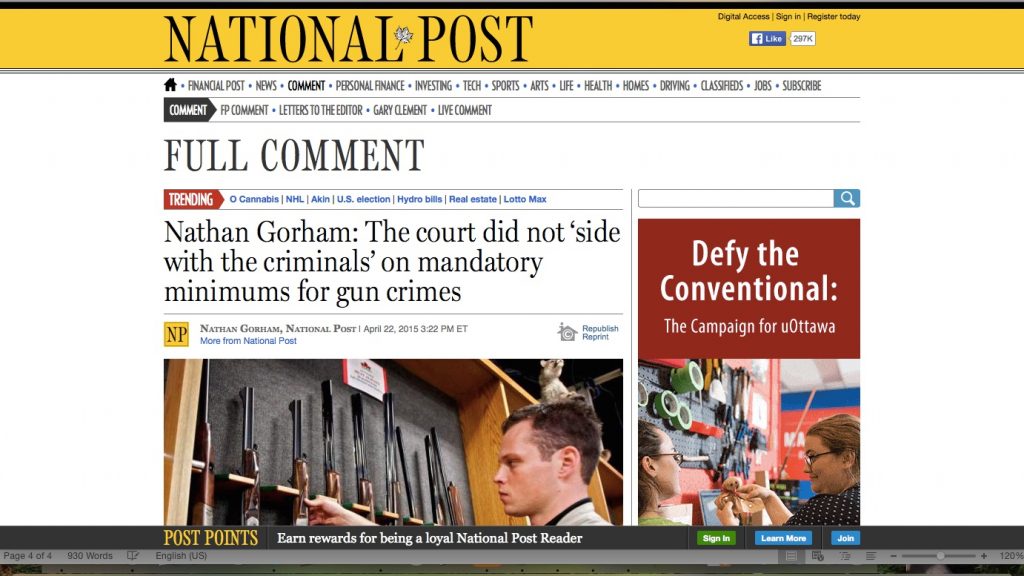 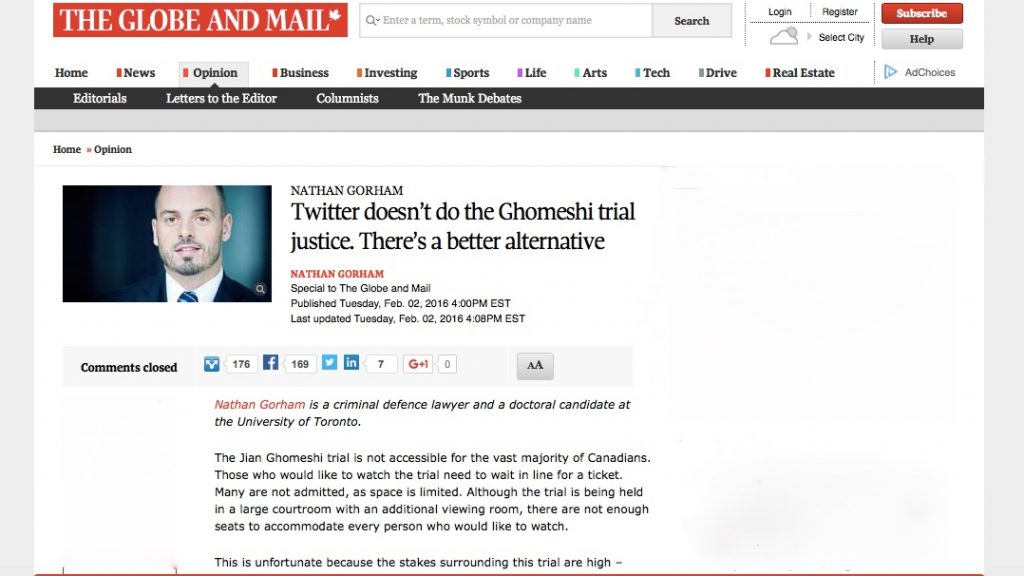 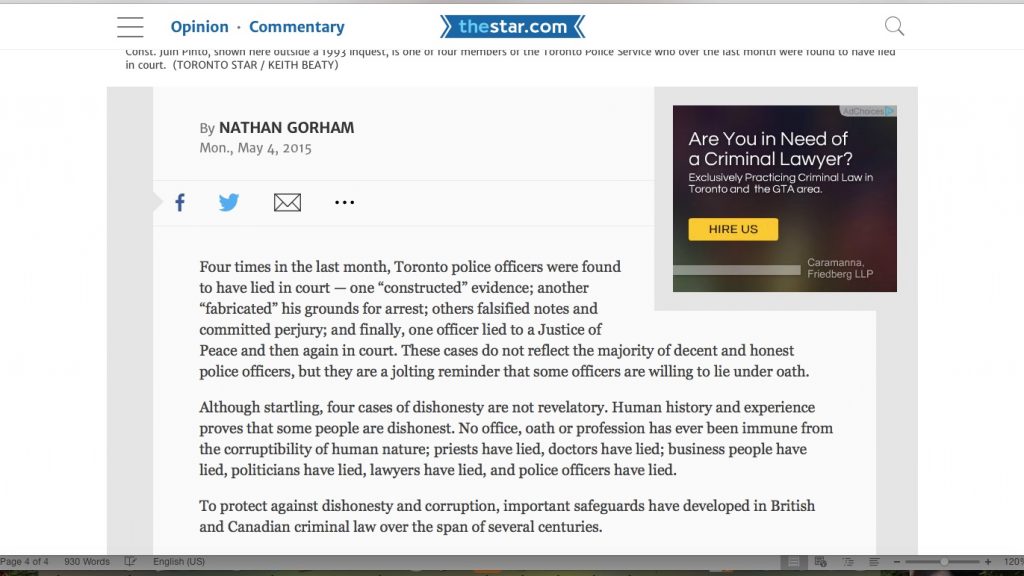 Mr. Gorham is a member of the University of Brunswick, Faculty of Law. He teaches Criminal Law, Legal Ethics, and Homicide and coaches the Gale Moot Team.

Mr. Gorham is also a doctoral candidate at the University of Toronto, Faculty of Law. His research examines miscarriages of justice in the bail system.

During his studies at Queen’s University, Mr. Gorham’s writing was regularly published in academic journals and he won variety of academic awards, including highest overall standing for overall performance in criminal law related courses.